This section will cover the badges worn by the New Zealand Corps.
Many of them came into existence in 1911, with the formation of a permanent New Zealand Army, but a few had existed before, in smaller formations attached to Volunteer units throughout NZ.
The bulk of the units formed because of the First World War (NZ Army Ordnance Corps, NZ Provost Corps, NZ Machine Gun Corps to name a few), which enlarged the New Zealand Army ten-fold, and thus made a requirement for specialised units to support and manage the large amount of men and women in uniform.
1911 also saw the introduction of the Territorial Force, based on the UK system, and replacing the Volunteers before.  They mainly wore the same badges of their permanent counter-parts, but there are some exceptions.
This section is under construction and will take a while to build up. 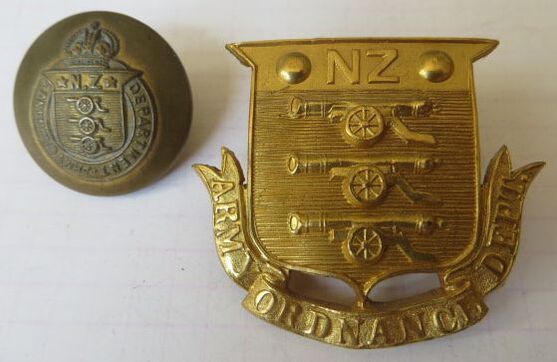 Opposite Left: A gilt brass, 25mm button to the New Zealand Army Ordnance Department. It has a maker mark of "Hobson & Sons, London".

Opposite Right: A scarce New Zealand worn only, cap badge to the New Zealand Army Ordnance Department. Its maker mark to back to "C M Bay". No collars appear to have been worn.

Below: Early New Zealand Army Ordnance Corps Cap and Collar badges, worn in France from 1917. All three have a "NZ" brazed to top. No maker mark, but looks to be "Gaunt" manufacture 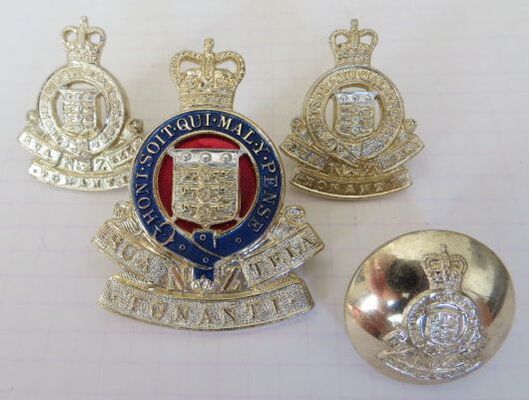 The R.N.Z.A.O.C. was absorbed into the Royal New Zealand Logistics Regiment on 9th December 1996. 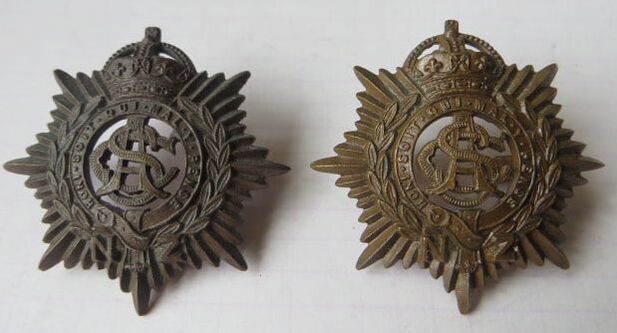 Opposite Right: A darkened brass version of the Officers Cap badge to the New Zealand Army Service Corps. This badge has 2 tangs or blades to back (one sadly broken) and is stamped "J R Gaunt London" 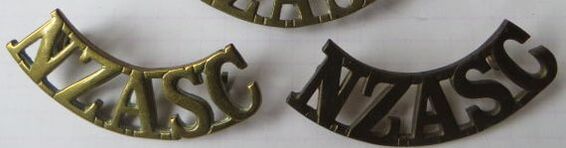 Top Left: A 2 piece shoulder title to the Motor Transport Company of the New Zealand Army Service Corps. Separate "MT" soldered onto a N.Z.A.S.C title. 4 lugs to back (2 D shaped to the MT title, 2 hex type to the NZASC title). No maker mark and missing one hex lug to back.

Center: A 2 piece shoulder title to the Motor Transport Company of the New Zealand Army Service Corps. 2 hex lugs to back, along with the maker details of "J R Gaunt London". Brazed rather than soldered together. Missing the foot of the "C".

Bottom Right: A curved gilt brass title to the New Zealand Army Service Corps. Thick copper looped lugs to back and the maker mark impressed to "Stokes" for Stokes & Sons of Melbourne.
Above Left: A Royal New Zealand Army Service Corps Cap and Collar pairs in anodised Aluminium. The Cap is 2 piece, with a brass and enamel backing plate to center, stamped "T". It has pin's for lugs. Tow of the collars have pins for lugs, while another two have loops. They are single piece, two tone Aluminium. Note the colour does fade with time and exposure to air/humidity.

Above Right: A gilt brass, enamel and chromed version of the Cap badge. This has had its lugs removed and 2 long pins affixed to back to be worn as a broach?

On May the 12th 1979, the Corps was disbanded and became the Royal New Zealand Corps of Transport. 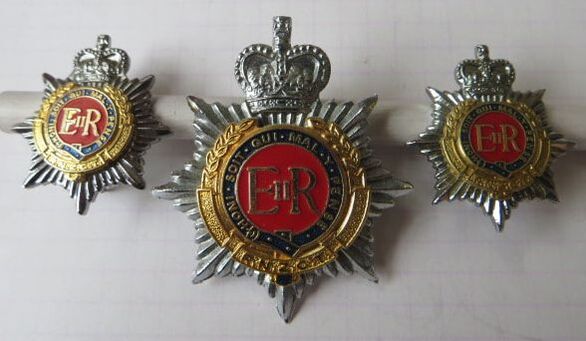 The Royal New Zealand Corps of Transport formed on the 12th of May 1979.

Opposite: A chromed and gilt metal, with resin center Cap and Collar set to the Royal New Zealand Corps of Transport.

Opposite: A Cap and Collar set in gilt metal and resin to the Royal New Zealand Logistics Regiment. The Cap badge has screw posts to back, while the 2 Collars have pins. No maker mark. 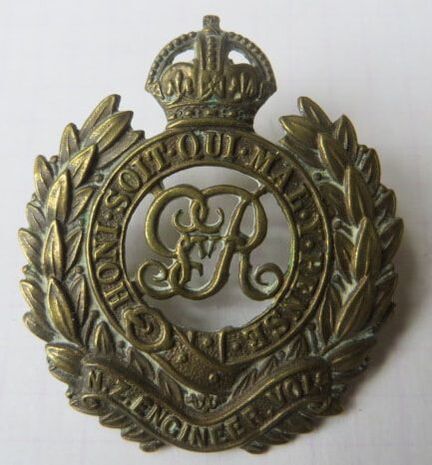 Opposite: A rare gilt brass cap badge with George V Cypher (reigned 1910 to 1936) to the New Zealand Engineer Volunteers. 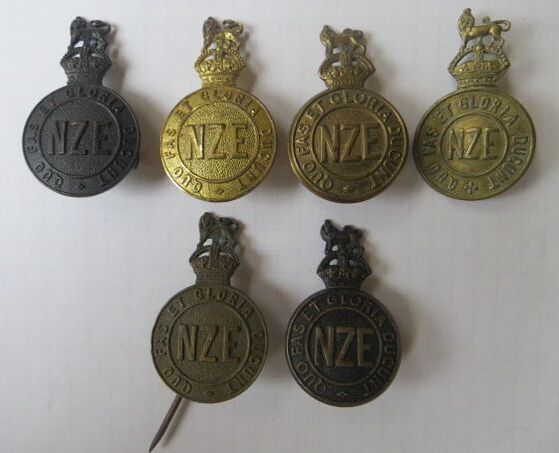 Opposite: A selection of NZE other ranks Cap badge as follows:
Top Left: A semi-solid backed, darkened copper Cap badge to the NZE by "Stokes and Sons, Melbourne".

Top 2nd from the Left: A semi-solid backed, gilt brass Cap badge to the NZE by "Stokes and Sons, Melbourne".

Top 2nd from the Right: A Gilt brass Cap badge to the NZE. No markings to back, but pressed type brass lugs.

Top Right: A variation on the NZE Cap badge in gilt brass, but with much smaller "NZE" to center and large + to lower banner.

Bottom Left: A Gilt Brass, semi-solid Cap badge, marked "Stokes & Sons, Melb" in a straight line to back. Issued and worn by 557050 Sapper Ewen Charles William Mills in WW2. Ewan was a neighbour and family friend. He added the "spike" after the lugs broke off his badge.

Bottom Right: A darkened brass cap badge to the NZE with a maker mark of "M & K, W" to upper center back, for Mayer and Keane of Wellington. 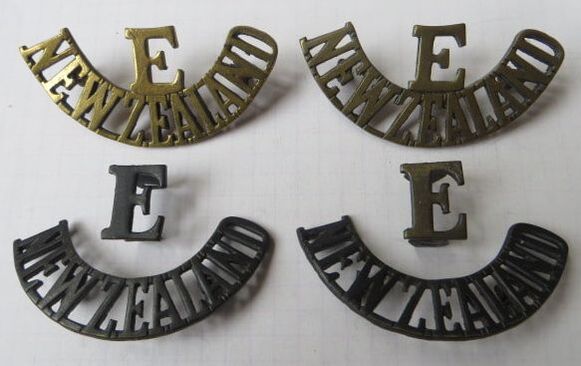 Opposite: A selection of New Zealand Engineer Tunnelers shoulder titles. The top two brass have a "E" brazed to the top of a standard "New Zealand" title.
The below two are in darkened brass, and come with a separate "E". 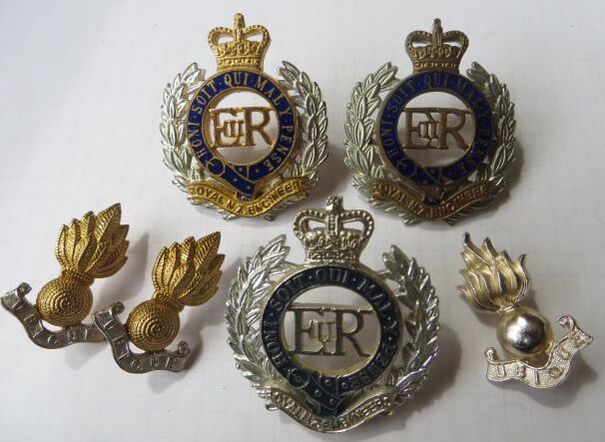 With the change in title in 1947 with the prefix "Royal", the Corps of Royal New Zealand Engineers did not change their badge, but continued to wear their NZE king crown badges. It was only after the death of George VI in 1952, that they finally changed their badge.

Bottom Center: A 2 piece, anodised aluminium and paint Cap badge. Long looped lugs to back, but no maker.

Bottom Right: A single anodised aluminium Collar to the RNZE. Pins to back. 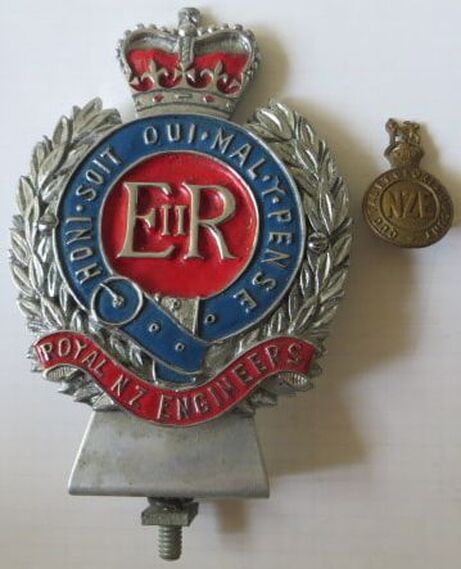 Opposite: A car or truck badge to the Corps of Royal New Zealand Engineers. The Gaunt plaqued cap badge is for scale. This huge aluminium badge would be mounted via the bolt at the base through the bumper of the car/truck. No maker mark to back.

The New Zealand Machine Gun Corps was forming January 1916 in Egypt. Prior to this, each regiment had their own Machine Gun Section.
There were 2 New Zealand formations, deployed to France and to Palestine and the Middle East during WW1.
The NZMGC in France went with the newly formed New Zealand and ANZAC Divisions in April 1916. They were disbanded at the end of the war in 1918.
The NZMGC in the Middle East would form a Mounted Squadron and ride with the NZ Mounted Rifles and NZ Camel Corps. They disbanded in 1919.
During WW2, the NZMGC formed again as the 27th (Machine Gun) Battalion of the 2NZEF in 1940 and would go on to fight in Greece, Crete, North Africa and Italy. They disbanded in 1945, and as a overseas serving unit in the 2NZEF, would have worn the NZ "Onwards" Badge. 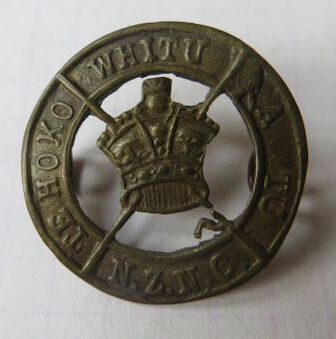 Opposite: A scarce 1st type collar badge to the Battalion, which were made in New Zealand. They have the smaller "N.Z.N.C" or New Zealand Native Corps at the Base. Some Cap badges have been found with the mark of "Watts, Auckland".

Below Left, Top Row: The 2nd Type of New Zealand Native Corps Cap and Collar set (worn as either) in Bronze, with the larger N.Z.N.C. to base. They have distinct copper wire lugs to back.

Below Left, Bottom Row: The 2nd Type of New Zealand Native Corps Cap and Collar set (worn as either) in Brass, with the larger N.Z.N.C. to base. The bottom left Cap/Collar is in cast brass.

Below Right: The 3rd Type of badge to the New Zealand Pioneer Battalion. Note this badge is widely faked, and taken from dies used by the British firm Firmin. Usually if the badge is in its original state, there is a non-voided area between the necklace and the Warriors tongue. This was on original Firmin made badges, but is also on the modern day copies. The copies also had a slider to back, but this has changed, and they do have lugs like the originals now.

Below Right, Top Row: A gilt brass Cap and Collar set to the New Zealand Pioneer Battalion. All have a Gaunt plaque to back.

Below Right, Bottom Row: Again a gilt brass Cap and Collar set to the New Zealand Pioneer Battalion. Note the necklace has been removed. Maori tradition does not permit a Warrior to wear jewellery into battle, so they modified the badge in the field by removing it. All three badges are made by "J R Gaunt London". Note this does create a issue with the modern day fakes, who then just remove the non-voided area and sell the badge as a "modified" original.

Below Top Row: A bronze Officers Cap Badge to the New Zealand Cyclist Corps. It has three tangs or blades to back and a maker plaque for "J R Gaunt London".

Below Bottom Row: A Cap and Collar set in gilt brass to the New Zealand Cyclist Corps. Both Collar badges are marked "J R Gaunt, London" with a small plaque to the back of the crown. The collar on the left, has the word "ARMY" faintly under the "NZ" on the lower banner, where Gaunt modified the British dies to strike the New Zealand badge. 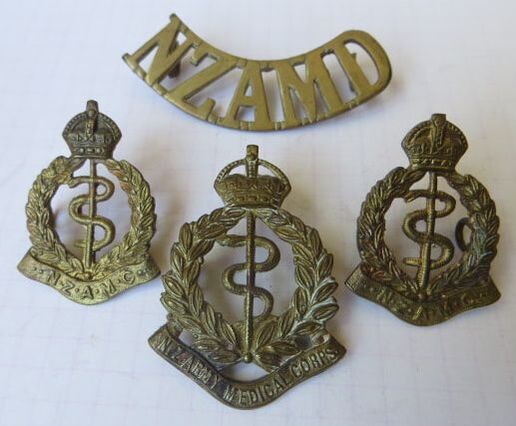 Above Center: A Cap and Collar badge set to the New Zealand Army Medical Corps in gilt brass. Worn from 1911, by the Permanent Force. These are scarce , as the Corps must have been very small. Note the differences in title between the Cap and the Collar badges. The cap has the wording "N.Z. Army Medical Corps, while the Collars only have "N.Z.A.M.C". 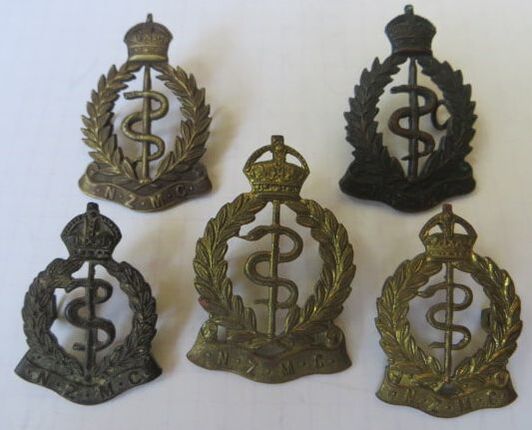 Above Right:
Top Row: A darkened copper set of cap and collar badges to the Territorial New Zealand Medical Corps. All have to back the maker mark of "Stokes & Sons, Melb".

Bottom Row: Same as above, but in a gilt finish. Solid backed and with the maker mark of "Stokes & Sons, Melb".

Opposite:
A selection of gilt brass or darkened copper collar and a Cap badge to center. None are marked but some have flat, hex lugs to back, while others have thin wire. None are maker marked. Note the differences in styles of crown. All have the N.Z.M.C banner. 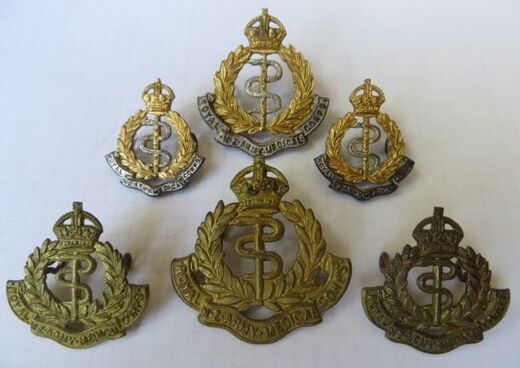