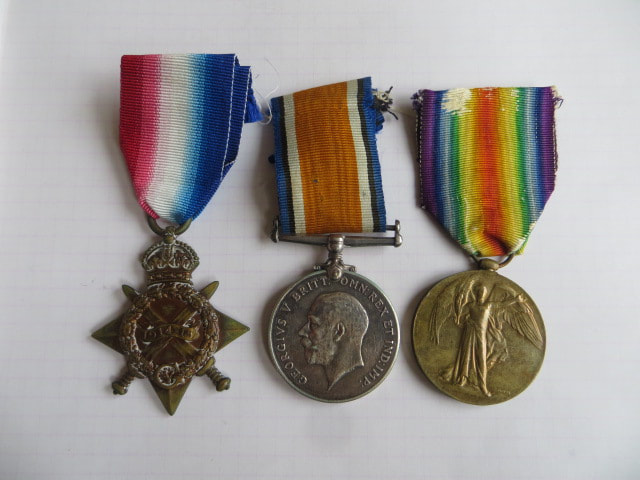 Charles' details are correctly impressed to his 1914-15 Star and to the rims of his BWM and Victory Medal.

He was a clerk before joining up, for Gordon & Gotch in Wellington. He lists his next of kin as living in Lewisham, London, and a friend in Wellington, New Zealand as a previous address. Charles was born in Blackheath, London, England.

He joined on the 17th of Aug 1914 and set sale with the main body of the New Zealand Expeditionary Force in October 1914, bound for Egypt.

He went on to serve 202 days only, oversea's with the New Zealand Medical Corps - Field Ambulance, due to be discharged as "no longer fit for active service, due to poor eye-sight" on the 21st of May 1915.

In WW2, Charles signed up again, buy this stage he was a Accountant, and saw Home Service in the Home Guard from 1941 to 1942. He obtained the rank of Sergeant, and his service number was 2/18/791.

His medals are in good condition with the 1914-15 Star with a piece of replacement ribbon attached. His BWM and Victory medal have their original ribbons attached. He was also entitled for his WW2 service, to a 1939 to 1945 British War Medal and a WW2 New Zealand Service Medal, both of which would have been un-named as issued. I do not know the where-a-bouts of the other two medals.

His service file for both WW1 and WW2 is here: