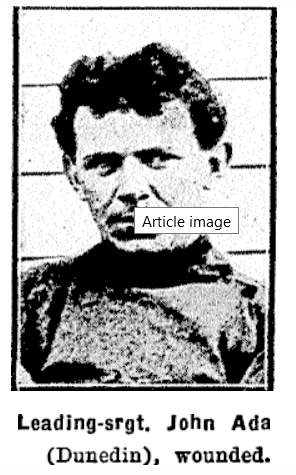 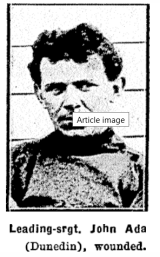 John was a storeman in Dunedin. I can't give all details as his file has been incorrectly copied, so I am missing a full scan of his front sheet. He lists his next of kin, a friend, in Graham St, Dunedin. He was born in Perthshire, Scotland.

He marched into Sling Camp on the 21st of May 1917 and joined the 4th Reserve Battalion of the Otago Infantry Regiment. He then embarked for France on the 21st of June 1917.

He joined the 3rd Battalion of the Otago Regiment in the Field in France on the 9th of July 1917.

John was appointed Lance Corporal on the 10th of Oct 1917.

He was appointed Lance Sergeant soon after.

On the 5th of Jan 1918, John reported wounded to No.3 Field Ambulance, with a gunshot wound to the lower abdomen.

Discharged from Hospital and on leave from the 13th of April 1918.

Attached for a Course of Instruction at the School of Musketry at Hayling island in 1918 on the 27th of July 1918.

John was discharged from the NZ Army, in NZ on the 26th of Feb 1919, due to the termination of the War.

John was also entitle to a British War Medal to go with this Victory medal. I do not know the where-a-bouts of the other item. His Victory is in good condition, with a length of ribbon attached.