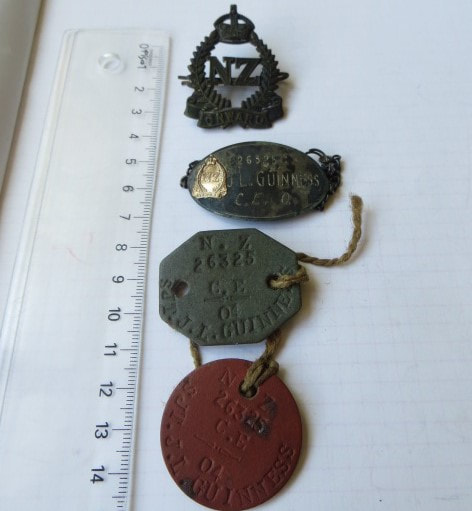 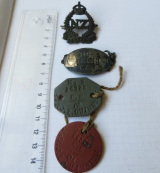 A set of 4 items to 26325 Sergeant John Leslie Guinness of the 2nd New Zealand Expeditionary Force.

John was a bank clerk prior to his enlistment in 1940. He lists his address and his wife's address as Campbell's Bay, Auckland.

He is listed as a Acting Sergeant for NZ Base Pay Office or the NZ Army Pay Corps.

He served in the 2nd New Zealand Expeditionary Force Third Echelon (they left NZ in 1940 for the middle East).

John's service file is NOT on line.

Group consists of WW2 era NZ General service Onwards Cap badge (darkened, but with both lugs present to back), a ID Bracelet in Silver (hallmarked to back) with gold "onwards" badge attached to front. It is inscribed "26325 J L Guinness, C.E. O". Two fibre dog tags to John, with his details impressed to both.