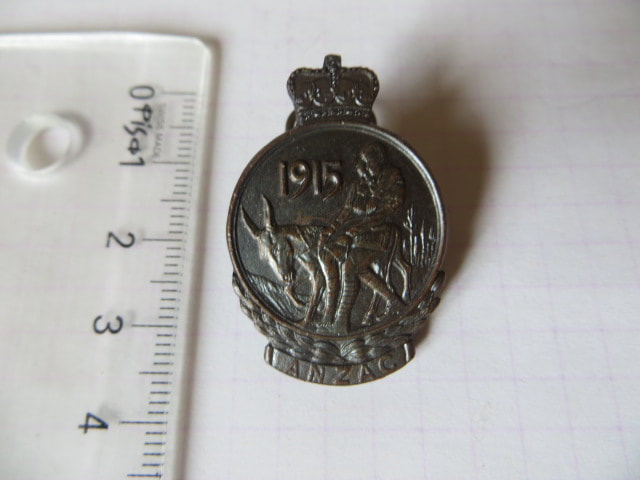 A small bronze lapel badge issued to relatives of the Gallipoli Campaign in 1967 by the New Zealand Government to mark the 50th Anniversary of the landings.

The badge is correctly impressed to back with the serial number 9/433 for Trooper John Adam Wilson of the New Zealand Expeditionary Force.

He left New Zealand as part of the main body in October 1914, and arrived at Suez that year.

Admitted to Hospital from ANZAC on the 7th of Aug 1915 with Dysentery.

Transferred to the UK and admitted to Hampstead Hospital on the 30th of Aug 1915.

Attached ti NZ General Base Depo Etaples on the 10th of June 1916.

Rejoined unit the Otago Mounted Rifles in the Field on the 14th of July 1916.

Evacuated out to hospital on the 4th of Feb 1917 with Influenza.

Admitted to NZ No.3 Field Ambulance on the same day.

Attached to NZ General Base Depo Etaples on the 3rd of Sept 1917.

Classified at C fit and marched out to UK from France on the 10th of Nov 1917.

Classified as "unfit" by Army Medical board and added to NZ roll on the 12th of Jan 1918.

Discharged from the NZ Army on the 12th of Aug 1918 due to no longer being physically fit for active service on account of illness contracted while on active service.

In 1967, in conjunction with the Australian Government, all surviving Gallipoli veterans were awarded a Medallion in a case. All families who had a relative serve at Gallipoli could apply for a lapel badge.

He was also awarded a 1914-15 Star, British War and Victory Medal. All other items, I do not know there where-a-bouts of.

His lapel badge is in good condition, with just some light wear/polishing to high-points. It comes with the correct wire pin, which is often lost.