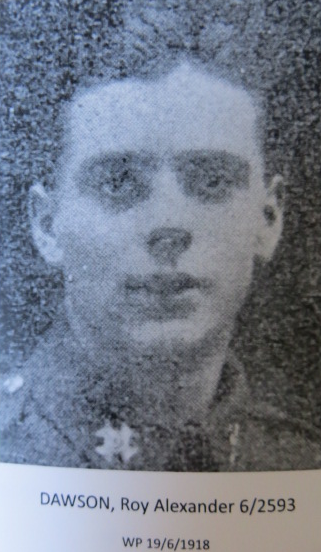 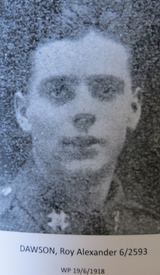 Roy started his service on the 17th of April 1915 as part of C Coy, 6th Infantry Reinforcements.

His initial Service Record sheet is missing from his on-line records, so till 1917, details are a bit patchy.

Arrived at Murdros in the Dardanelles on the 30th of Sept 1915 and attached to the Canterbury Infantry Battalion.

Roy does not appear to have gone to Gallipoli.

Returned to Egypt in early 1916 with the general evacuation of the peninsula.

Posted to NZ Base at Ismailia, Egypt.

Presumably left for France around April 1916 with the deployment of the NZ and ANZAC Divisions to France.

Attached to Divisional Headquarters at Rouen on the 4th of Dec 1916 as part of 2nd Coy, 1st Battalion of the Canterbury Infantry Regiment.

Rejoined Battalion on the 22nd of Feb 1917 - 2nd Coy, 1st Battalion of the Canterbury Infantry Regiment.

Attached to NZ Reinforcement Wing of ANZAC Division Camp on the 9th of April 1917.

Admitted to Canadian General Hospital with Gunshot wounds to the back. Classified as "severe" on the 5th of Oct 1917.

Evacuated to England and admitted to NZ General Hospital Hornchurch on the 10th of Nov 1917.

Appointed Lance Corporal on the 6th of May 1918.

Attached to School of Instruction at Gosport on the 20th of May 1918 and attended a Physical and Bayonet Course.

Attached to Aldershot from above School on the 26th of July 1918 to attend similar course.

Qualified in his course as good to very good on the 1st of July 1918.

Proceeded to Tidworth Camp for School of Instruction on the 12th of Aug 1918.

Appointed Temporary Corporal on the 20th of Aug 1918.

Roy was discharged on the 29th of March 1919 from the New Zealand Army on termination of hostilities.

Roy states that he served in the Christchurch Senior Cadets prior to WW1.

Roy was awarded a 1914-15 Star and British War Medal to go with his Victory Medal. He was also entitled to wear a wound strip from the 4th of Oct 1917. In 1967 he also applied and was sent a Gallipoli Medallion and Lapel Badge by the New Zealand Government. I do not know there where-a-bouts of the other items.

His Victory medal is in good condition, with length of ribbon attached.

His long service file can be found in two locations here: