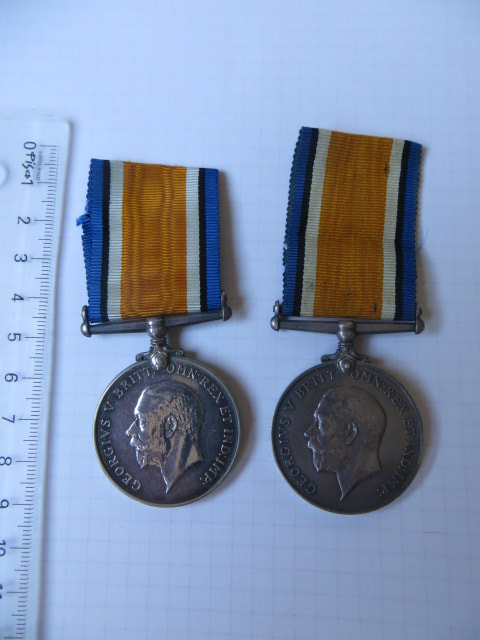 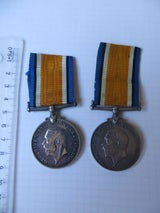 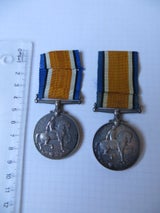 A pair of full sized WW1 British War Medals to Brothers or relatives.

George was a seaman prior to his WW1 service, serving on the SS Alexander which was a cargo/passenger vessel owned by the Anchor Line (absorbed into the Union Steam Ship Company in 1972), and was in service from 1903 to 1950, mainly in the Marlborough Sounds area of New Zealand. George worked for a Mr W Wildman of Nelson. He lists a Cuba St, Wellington address, while his next of kin, his Sister is in Bow, London. George was born in London.

Embarked for France from Alexandria on the 7th of April 1916.

Admitted to the 12th Australian Field Ambulance on the 27th of Sept 1917 (gastritis and other debility).

Admitted to No. 2 NZ General Hospital, Walton-on-Thames while on leave on the 14th of Oct 1918 (Influenza).

Transferred to Hornchurch Hospital on the 30th of Nov 1918.

George is discharged on termination of hostilities on the 27th of May 1919 in New Zealand.

George past away at Wellington on the 16th of August 1941.

He was entitled to a 1914-15 Star and Victory Medal to go with this BWM. I do not know the where-a-bouts of the other items for George and his relative William.

Both BWM are in good, uncleaned condition, though William's is a little more polished than George's. Both have lengths of ribbon attached, sewn in loops.

The image of SS Alexander is taken from the New Zealand Ship and Maritime Society Website here: