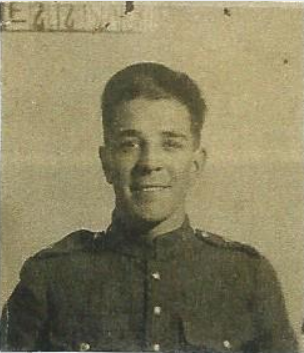 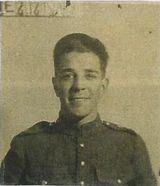 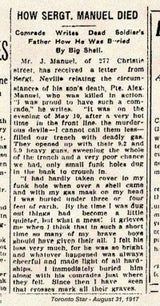 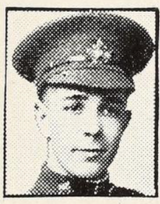 Sandy was born at St Johns, Newfoundland on the 29th of December 1893. He lists his address as a Christie St, in Toronto on time of enlistment. His Mother is listed as next of kin at the same address.

He enlisted on the 29th of October 1915, aged 21 with the 9th Mounted Horse, but transferred to the 95th Overseas Battalion.

He embarked in Canada on the 31st of May 1916 for overseas service.

Disembarked in England on the 8th of June 1916.

Marched into Bramshott Camp and assigned to the 5th Canadian Training Reserve on the 24th of Jan 1917.

Proceeded overseas to France to serve as part of the 20th Battalion on the 17th of Feb 1917.

Sandy is remembered on the Vimy Memorial, France.

A touching letter was published in the Toronto Star on the 31st of Aug 1917, describing how Sandy and mates were killed in their trench by a large shell explosion by his Sergeant.

Items attached have been taken from the Canadian Virtual War Memorial, which can be searched in here:

Sandy's Victory medal is in good condition, with a length or original ribbon attached. He was also entitled to a British War Medal and I imagine his parents would have also recieved a Silver Canadian War Memorial Cross. I do not know where the other items are.