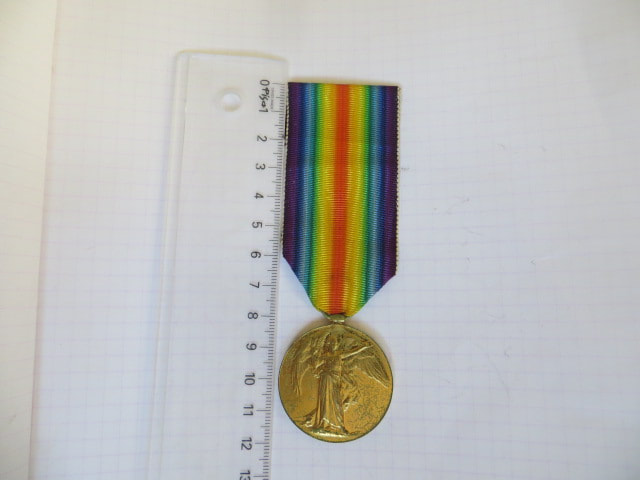 A rare WW1 Victory Medal to a Anglo-Boer War veteran to 42466 Private Ernest Burgess of the New Zealand Expeditionary Force.

He left New Zealand from left Lyttelton on the SS Norfolk, and arrived in South Africa in late May. The 10th they were at Newcastle in Natal when the war ended on 31 May 1902.

The 10th contingents sailed for home in July 1902.

Ernest was a Fellmonger (a dealer in hides or skins, particularly sheepskins) prior to his WW1 service, living in Helena St, Dunedin. He lists his Mother as next of kin initially, living at the same address, but this is later updated to his Brother, J Burgess, living at Burnside, Dunedin. Ernest was born in Green Island, Dunedin, NZ.

He lists his date of birth of 24th of March 1892, which is wrong, as it would make him very young in his Boer War service. On his attestation papers he lists his true age of 44 years and 7 months (in 1916).

Transferred to Featherston Detail on the 3rd of Feb 1917.

Transferred to Trentham Detail on the same day.

Transferred to D Coy, 23rd Infantry Reinforcements on the 20th of Feb 1917.

Embarked on the 14th of March 1917 from Wellington for overseas.

Marched in same day to Sling Camp, UK and assigned to the Otago Infantry Regiment.

Marched into NZ General Base Depo Etaples on the 23rd of June 1917.

Joined 8th Coy, 3rd Battalion of the Otago Infantry Regiment in the field on the 9th of July 1917.

Detached to 1st Battalion, Otago Infantry Regiment in the field on the 7th of Feb 1918.

Attached to NZ Divisional Wing on the 8th of Feb 1918.

Detached to Corps School on the 7th of March 1918.

Admitted to No.2 NZ Field Ambulance the same day.

Admitted to No. 3 Casualty Clearance Station the same day.

Admitted to No. 2 NZ Hospital Waltham-on-Thames on the 30th of Aug 1918 (diagnosed with carbuncle axilla - a carbuncle is a red, swollen, and painful cluster of boils that are connected to each other under the skin).

Discharged on the 9th of Sept 1919 as no longer physically fit on account of illness contracted on active service.

Ernest was entitled to a Queens South Africa Medal with SA 1902 bar, as well as a British War Medal, to go with this Victory Medal. Sadly, I do not know where the other two medals are.

His Victory medal is in good condition, with his details correctly impressed to the edge. It has a length of ribbon attached.