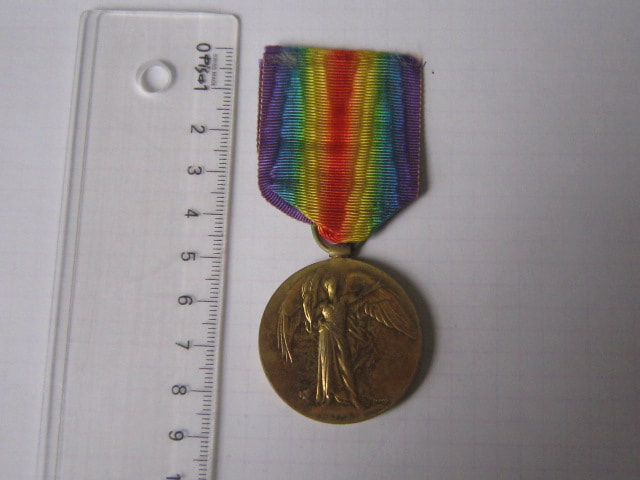 Horace's details are correctly impressed to the rim of his medal.

He was a School Teacher, prior to his service in WW1, with the Otago Education Board, teaching at Clyde School, Otago. His next of kin, is his Father at a Alexandra, Otago address. Horace was born in Dunedin.

There are a number of articles on Papers Past https://paperspast.natlib.govt.nz/newspapers?items_per_page=10&page=10&query=horace+nind&snippet=true in the personal columns which refer to both Horace's send off, and return. He seems to have been popular figure and the people of Clyde honored him.

He started his service on the 2nd of Feb 1917 with D coy, 29th Infantry Reinforcements.

He left New Zealand on the on the 15th of Aug and marched into Sling Camp in the UK on the 3rd of Oct 1917, where he joined the 3rd Reserve Battalion of the Otago Regiment.

It wasn't then till the 30th of Sept 1918 that he left for France and joined the Otago Infantry Regiment in the field on the 14th of Oct 1918.

He indicates on his attestation papers that he also served before WW1 in the Territorials with the 10th (North Otago) Infantry Regiment.

His service file is full of interesting stuff including the fact that he was prevented by the NZ Education Board from enlisting until he had sat his teachers exams in Jan 1917. Initially he had wanted to join the 21st Infantry Reio Draft, but because of the above, he was slotted in for the 26th Reio draft, with the service number 34020. Due to a mix up in communication between Military districts and I think Horace's rural location, he missed 2 drafts, before writing to the Minister of Defense asking why, well after the 2nd of Feb 1917, when he was meant to be called up, he wasn't. As he said, he couldn't live on "air" and that would have found easy employment as there was a huge shortage of male Teachers at the time, but that he hadn't sort, in case he was suddenly called up.

When Horace arrived back in New Zealand, he received treatment for TB, and it states on his file that he is discharged from the Army as he is no longer fit due to illness contracted on active service. He was awarded a Silver War badge, but I do not have the number or badge.

He was entitled to a British War Medal, along with this Victory. I do not know the where-a-bouts of his other medal/SWB.

The Victory is in good condition, with a small length of original ribbon attached.

He long service file is here: