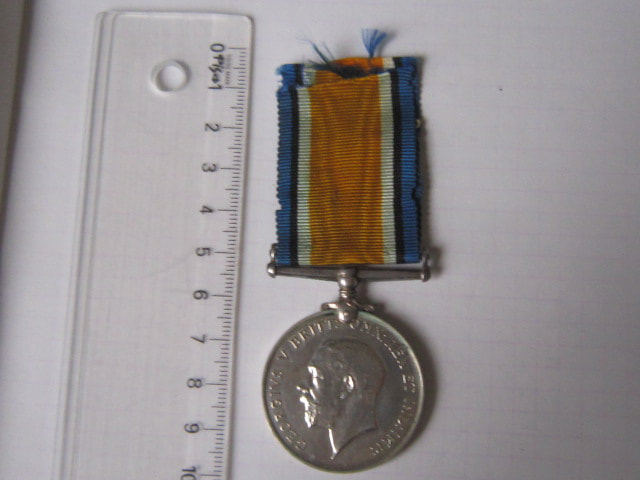 His details are correctly impressed to the rim of his BWM.

James was a Shepard prior to his WW1 0service, for a Mr Stevens, at Oporae. He lists his sister-in-law, as next of kin in Waipakiti, Dannevirke. James was born in Kirkcudbright, Scotland.

He attested on the 14th of May 1917, but didn't start his service until the 12th of Feb 1918, when he joined D Coy, C1 (so was unfit for Reinforcment training, according to the Army, and joined a separate Camp, which trained and usually fed men to a Army weight and standard - but James had a right flat foot, left was normal). He was then transferred to the 40th Reio on the 21st of April 1918, but was them moved to D Coy, 39th, only to be moved to E Coy, 40th NZ Rifle Brigade Reio draft on the 17th of June 1918.

James arrived in London on the 9th of Sept, 1918 after enduring what some described as "The Ship of Death" and joined a composite Battalion at Larkhill Camp in the UK.

The RMS Tahiti left New Zealand on 10 July 1918 with 1,117 troops onboard and 100 crew members, bound for England. It was the first exposure of the influenza strain on New Zealanders. The Tahiti was exposed to the flu when it called at Sierra Leone. The first soldiers suffering from Spanish influenza began reporting to the hospital on Tahiti on 26 August, the day that she left Freetown. By the time she arrived at Devonport on 10 September 68 men had died and a further nine died afterwards, an overall mortality rate of 68.9 persons per 1,000 population. It is estimated that more than 1,000 of those on board had been infected with the disease. A later enquiry found that mortality was worst in those over 40 years and that those over 25 had a higher mortality than those under 25. Mortality was also higher in those sleeping in bunk beds rather than in hammocks. The conclusion of the enquiry was that overcrowding and poor ventilation had contributed to the exceptionally high infection rate and death toll. It was one of the worst outbreaks worldwide for the 1918/19 pandemic in terms of both morbidity and mortality.

On the 4th of October 1918 he joined a Reserve Battalion of the NZ Rifle Brigade at Brockton Camp.

He was granted un-paid leave from the NZ Army, while in the UK from the 8th of March 1919 to the 3rd of May 1919. Possibly to visit relatives in Scotland.

He was discharged on the 17th of Sept 1919 from the NZ Army in New Zealand.

This is James sole entitlement, and his British War Medal is in good condition. It comes with length of ribbon attached.

His WW1 service file is here: