New Zealand, like many of the other Commonwealth countries of the time. looked to England for guidance with regards to forming its own Air Force.
Throughout the First World War, Kiwi's served with distinction in the Royal Flying Corps, but it wasn't until 1923 and the offer of planes from the UK that they took initially reluctant steps to set up their own Air Force.
On the 14th of June, 1923, the New Zealand Permanent Air Force was gazetted, as part of the New Zealand Army, consisting of 4 Officers and 2 other ranks full time, while 102 Officers were assigned as part of the New Zealand Air Force (Territorial), as reservists.
The first base was located outside Christchurch, at Sockburn, using the gifted planes from the UK. Later, this airfield was to be renamed "RNZAF Station Wigram" after Sir Henry Wigram, a New Zealand businessman and politician of the time, who donated both the land and money to purchase better planes.
In 1934 the New Zealand Permanent Air Force (NZPAF) was renamed the Royal New Zealand Air Force (RNZAF).
In 1937 the RNZAF became a interdependent organisation within the New Zealand Defence Force. 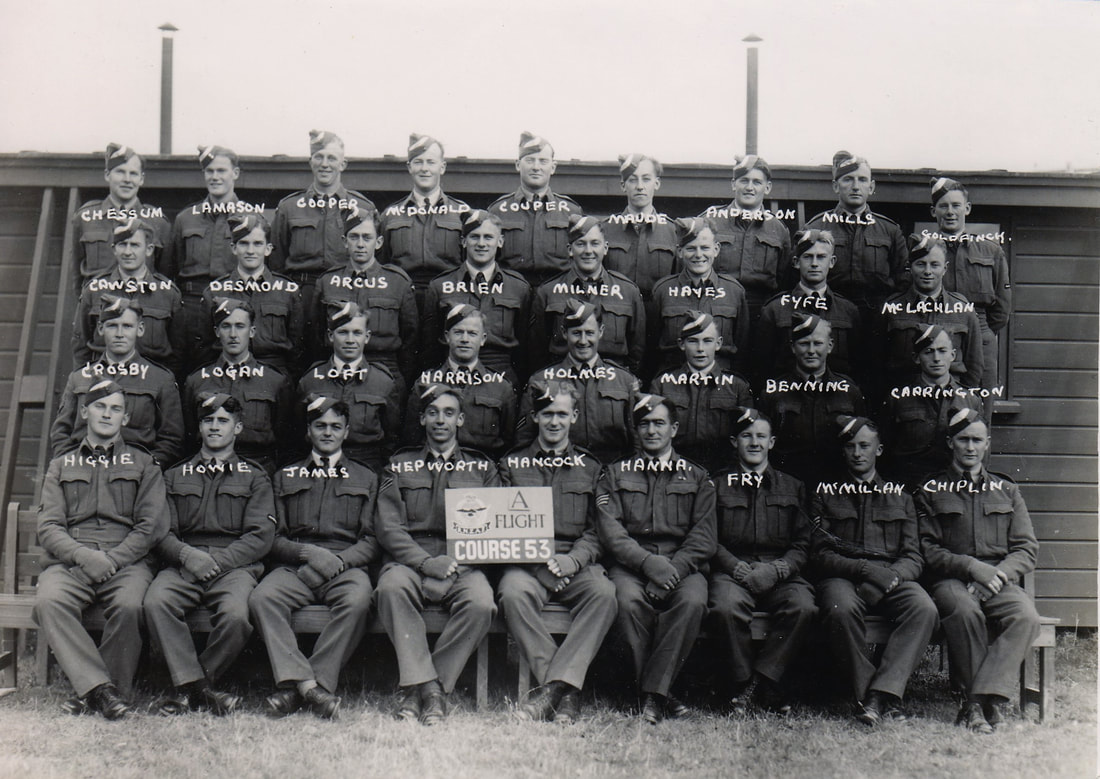 - Above: A 1944 image of the trainee Pilots at Ashburton's RNZAF No. 2 Elementary Flying Training School. Note the white peak to front of their side hats, which indicates they are under training.
- Opposite: A very faded Pacific theater side hat to a Warrant Officer. Light blue/grey material with a white cotton liner (sadly no markings), which is mildew marked.
The Cap badge is single piece, die stamped, with lugs removed and a brooch fitting to back.
The two brass buttons to front, are kings crowned, with eagle and "NZ". They appear to be "J R Gaunt" made. 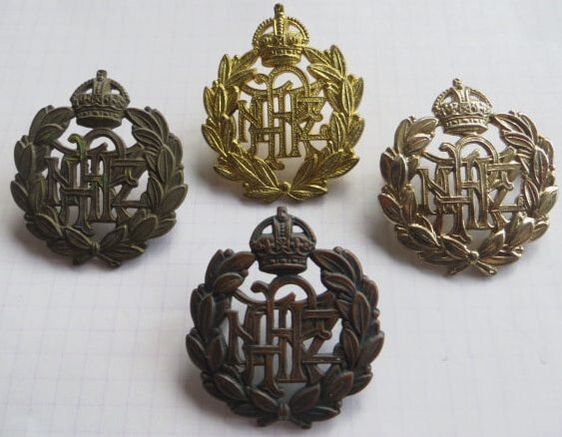 Much of the Royal New Zealand Air Force uniform and insignia is based on what the British Royal Air Force wore at the time. There are some exceptions.

Officers during WW2, provided their own uniforms, and New Zealand Air Force Officers wore the same insignia as their British counter-parts (except for shoulder titles).

Other ranks, wore the Royal New Zealand Air Force Cap badge on their side hats.
Opposite Top Center: A gilt brass Other ranks Cap badge to the Royal New Zealand Air Force. This is marked to back to "W Scully Ltd, Montreal", and is probably made for Kiwi members of the British Commonwealth Air Training Plan (BCATP), or Empire Air Training Scheme (EATS), which was held in Canada (among other places/countries) to train Pilots and Air Crews before moving them to theaters of war. New Zealand, Australia, South Africa, Britain and Canada took part in this plan, along with other countries.

Opposite Left: A subdued brass example of the Other ranks Cap badge to the Royal New Zealand Air Force.  Long copper looped lugs to back, but with no maker mark.

Opposite Right: A chromed, Other ranks Cap badge to the Royal New Zealand Air Force. It was mentioned that members of J Force (Occupation Japan) chromed their badges to give them more "bling".  Two long looped lugs to back, no maker mark.

Opposite Bottom Center: A darkened copper Other ranks Cap badge to the Royal New Zealand Air Force. Long copper loops to back and maker marked to "M & K, W" for Mayer and Kean, Wellington, to bottom, back edge. 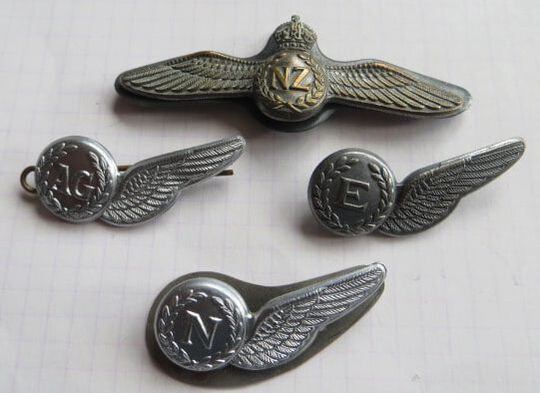 New Zealand, since the beginning of the war had always maintained a small Air Force due to the presents of German raiders in the Pacific. From 1941 with Japans entry into WW2 and its conquest of vast area's to the north of New Zealand, the government, with the help of the British Government, rapidly expanded its Air Force to defend against what it though was imminent invasion by Japanese Forces. From 1943, its allies shifted from a defense to a attacking roll, and New Zealand Air Force was deployed in tropical area's, taking the fight to the enemy.
At its peak, the Royal New Zealand Air Force has 34 squadrons, 25 were based outside NZ in the pacific.
Due to high humidity, cloth material was found rot at high rates, to counter this, in 1944, the NZ Government authorised the wearing of metal qualification insignia.
Opposite Top: A set of Royal New Zealand Pilots wings in plated brass (they also come in white metal only) with its backing plate and long white metal pin. Maker marked to "44, M & K, W" for 1944, Mayer & Kean, Wellington.

Opposite Left: A Royal New Zealand Air Gunners half wing. Missing its backing plate, but white metal, with two looped lugs to back, and maker marked to "M & K, W" for Mayer and Kean, Wellington.

Opposite Right: A Royal New Zealand Engineers half wing. Missing its backing plate, but white metal, with two looped lugs to back, and maker marked to "M & K, W" for Mayer and Kean, Wellington.

Opposite Bottom: A Royal New Zealand Navigators half wing. With backing plate, in white metal, with two looped lugs to back, and maker marked to "M & K, W" for Mayer and Kean, Wellington.

I also believe that there is a "S" half wing for Signaler in the Royal New Zealand Air Force, but these are rather scarce if its a WW2 era one. They seem to have been made from excess "N" or Navigators half wings, with a "S" added to the front, but you can still see the impression of the "N" to back. 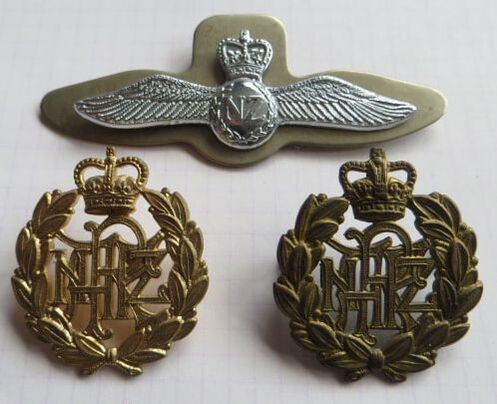 Post 1952, the Royal New Zealand Air Force updated its insignia with a Queens crown. It continues to also wear metal insignia to its Summer uniforms. So care need to be taken when collecting the metal half-wings as they only started to add a crown to the top post 1985. Between 1952 and 1985, the half wings tend to be chromed metal, rather than white metal or plated brass, which seems to be a feature of the 1944 to 1952 versions only.

Opposite Left: A gilt brass, Other ranks Cap badge to the Royal New Zealand Air Force, with Queens crown. Two copper lugs to back, no maker mark.

Opposite Right: Same as above, a gilt brass, Other ranks Cap badge to the Royal New Zealand Air Force, with Queens crown. Just some variation in crown and width of wreath. Two copper lugs to back, no maker mark. 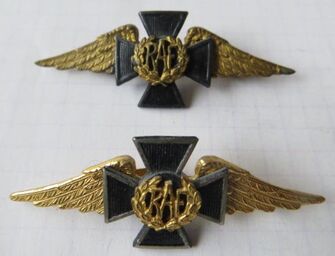 Prior to WW2, no Chaplains were permanently allocated to the RNZAF. Instead they served on a voluntary basis.  It wasn't until 1940, and the greatly expanded RNZAF, did the RNZAF have permanently appointed members to the branch.

- Opposite Bottom: A tanged version of the same badge, later as its marked "J R Gaunt Bham" to back.


- Opposite Top: A post 1956 Royal New Zealand Air Force Chaplains Branch Cap badge which has two tangs to back, but is not maker marked.

- Above, Middle Row: Both badges have a broach fittings and are maker marked to "J R Gaunt, Bham". There also appears to be a number or digits below the Gaunt maker mark, like "18" or "19" on both broached badges.

- Above Bottom: A slightly different version of the RNZAF Chaplains badge, with a thick wire sprung clip to back. Again marked "J R Gaunt, Bham"

It has been mentioned that there was also a winged "Star of David" badge for RNZAF Jewish Chaplains, introduced at the same time as the above badge, in 1956. I have yet to see one. 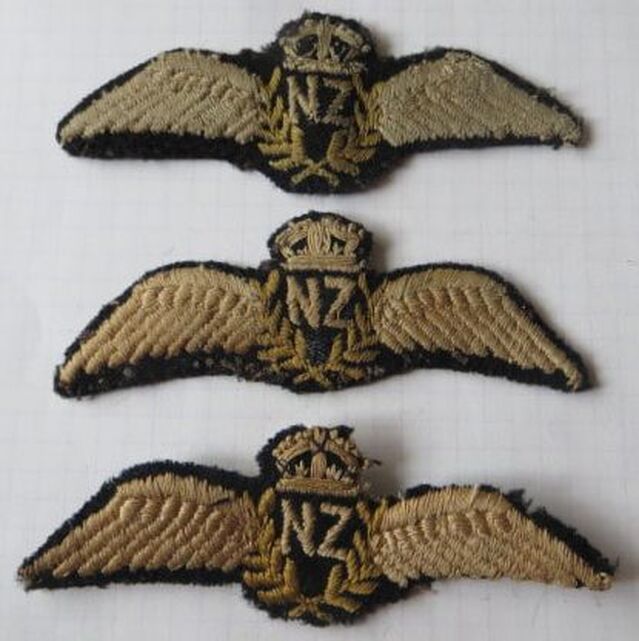 The Royal New Zealand Air Force based much of its uniform on the British Royal Air Force style of the time. Here are some of the cloth and material exceptions to insignia the RNZAF wore.

Opposite are a selection of non-padded Pilot wings, worn by member of the RNZAF during WW2. This type seems to have a yellow or light tan wreath to center.
All three have a hessian piece of backing cloth to the back of the crown only, while none have any traces of backing to the wings and body of the badge. The bottom pair of wings also has two poppers to back, to allow for easy attachment and removal from a tunic.
None are maker marked.

- Opposite: A superbly detailed, padded pair of pilots wings which came with three letters from WW2 NZ415032 Flying Officer Douglas Bertrand Skellon. He enlisted on the 7th of Sept 1941, and did three tours with 15th Squadron, in the Pacific, flying one tour with Corsairs and two with Kittyhawkes.
These wings are well padded, with fine black thread highlighting the feathers on the wings. A reddy brown wreath to center.
A wax paper lining to back over a dark backing cloth.

Opposite is a WW2 variation to the flat type of Royal New Zealand Air Force Pilots wings. Like most Commonwealth countries, New Zealand took advantage of the Wartime British Commonwealth Air Training Plan (BCATP), or Empire Air Training Scheme (EATS). Both are often just referred to as "The Plan", which was a massive, joint military aircrew training program which took Kiwi's and trained them as Pilots and Aircrews. New Zealand had its own training stations or bases, but many Kiwi's went to Canada to train in its BCATP scheme.
These wings are unusual in that they have red in the crown, which the Canadian Air Force Regulations allowed. Much metal and cloth insignia was produced by Canadian manufacturers at the time, and these red crowned wings were made for the Kiwi's in Canada, qualifying as Pilots. 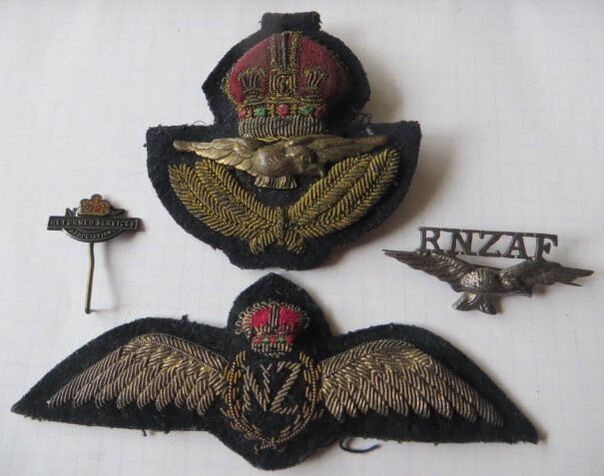 Opposite are items belonging to  4212851 Alan Landers Maclean. Alan was sent to Canada, and trained at the Royal Canadian Air Force's 34 Service Flying Training School, at Medicine Hat, Alberta.
He took part in Course 1,  Class 83.  and graduated on the 1st of Oct 1943.

According to a relative who I obtained the items from, he flew in England and eventually returned to New Zealand to farm.

Opposite Top: A Officers peaked cap badge of gilt brass and bullion thread. Black paper backing, but not maker marked.

Opposite Left: A New Zealand Silver Returned Services Association badge with paid membership tab for 1982 attached (Alan passed on the 2nd of May 1983). Badge is stamped to back "NZ 4212851".

Opposite Right: A cast silver(? - not marked to back) sweethearts badge to the RNZAF. Broach fitting to back, but no maker mark. 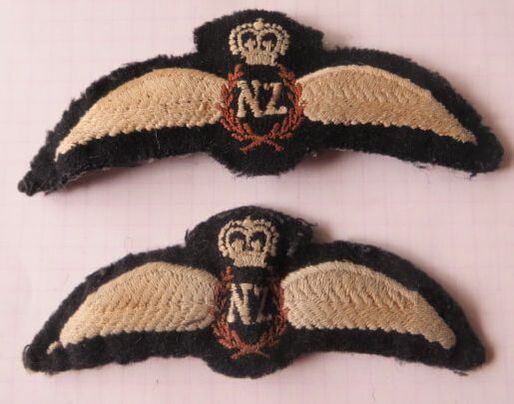 With a change in monarch, the Royal New Zealand Air Force updated its insignia with the new Queens crown. Here are two examples of padded RNZAF pilots wings. The top set has two poppers and some velcro to center to allow for easy adding and removal from a tunic.
No maker mark.

All RNZAF wore a national title on their upper sleeve's. For Officers, this was just the words "NEW ZEALAND". Other ranks wore the same but with a Eagle beneath. 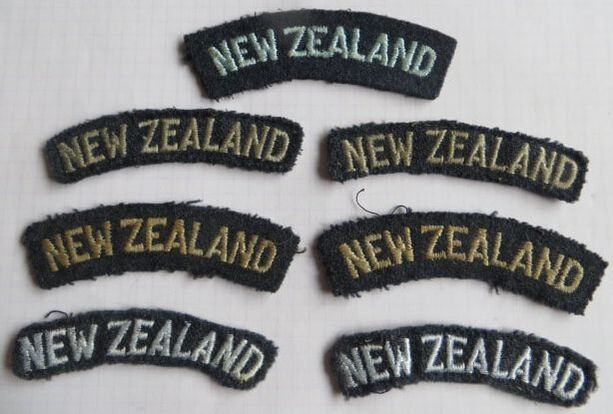 Opposite is a selection of national titles worn as a sew-in type on the upper shoulder of the service uniform of RNZAF personnel.

- 3rd Row: A matching pair of off-white letters on a dark blue wool background. The letters are very grubby to front. To back only one has a dark blue hessian backing cloth still.

- Bottom Row: A pair of light blue threaded letters on a dark blue wool background. Letters are bleached to front, and also bleaching is evident on the dark blue backing cloth.

- Opposite: A Canadian made New Zealand national shoulder title made for RNZAF members training there. Off-white letters on a dark blue background. Grey coloured backing cloth to back.

- Opposite: A unissued pair of RNZAF national shoulder titles with opposing Eagles beneath. Light blue thread on a dark wool backing. Note the extra thread to center, to indicate where to cut when sewing onto a uniform. Black backing cloth to back.

The Royal New Zealand Air Force had its own unique uniform buttons. Here are a few examples with their makers. 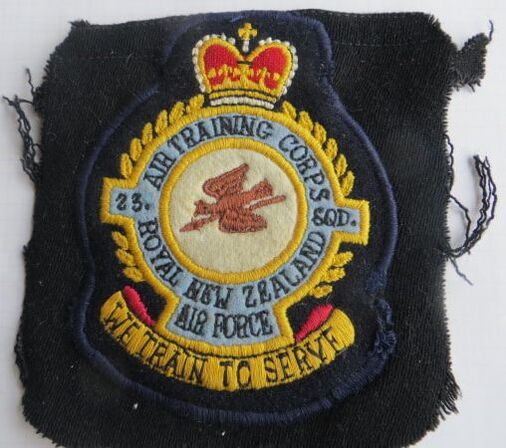 - Opposite: A Blazer badge (still on pocket) to 23 Squadron of the Air Training Corps of the Royal New Zealand Air Force.
23 Squadron is based in Nelson, and still going today, as part of the New Zealand Cadet Force.
30306594-2