"Specialists" were soldiers who received training outside the three main streams, i.e. not Infantry, Mounted Rifles or New Zealand Rifle Brigade.
I have groups these badges together as they cover Signalers, Machine Gunners, Medical Corps, Veterinarian Corps, Cyclist Corps, Chaplains  and Musicians.
These soldiers were to receive further specialised training in either the UK, or France, and then again when they joined their units. 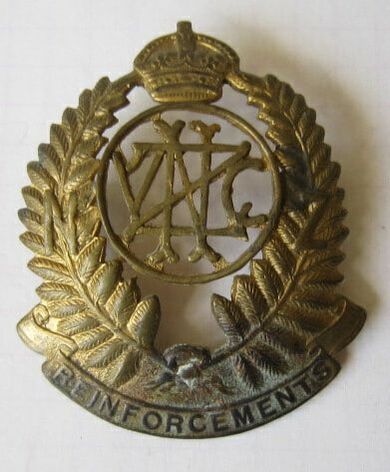 - Opposite: A scarce 2 piece, Veterinarian Corps reinforcement gilt brass cap badge. I have seen a handful of these over the years of collecting. All appear to be on this frame, but can also be non-void to center, which has the monogram of NZVC or New Zealand Veterinarian Corps. I have never seen any corresponding Collars for this badge. 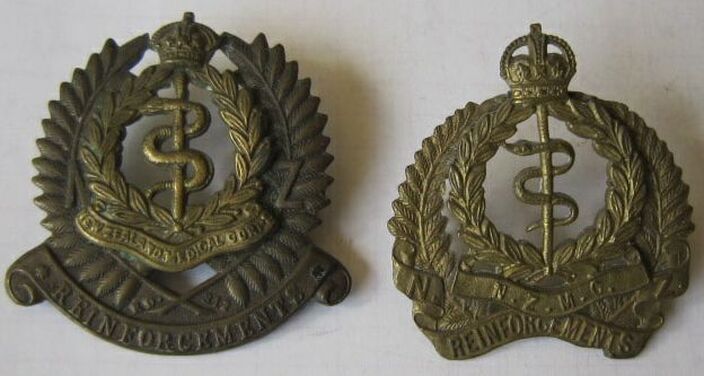 - Opposite: A pair of 2 piece NZ Medical reinforcement cap badges.
Both are gilt brass, and have a standard gilt brass reinforcement frame which has had a New Zealand Medical Corps Cap badge sweated onto the front. The lugs of the cap badge have been clipped/cut off. The reinforcement frame has either wire or hex type lugs to back.
I have not yet seen a corresponding collar badges to the Medical Reinforcements.

The NZ Cyclist Corps formed in 1916, with reinforcement drafts beginning to train that year.
RD or Registered Design numbers 838 and 839 were registered to Smith & Sherlaw (Watchmakers & Jewelers), Featherston Military Camp & Levin N.Z. on the 6th of April 1916.

The New Zealand Field Artillery had their own Reinforcement drafts during WW1. Being a private purchase item, their badge could have been any of the badges which have been covered in the Infantry Reinforcement section on the website. From pictures taken at the time, it looks likely that they wore the standard New Zealand Artillery Cap badge (NZ to top scroll) and the small flaming grenade Collar badges.
Some of the Sweetheart badges do though record the draft numbers. 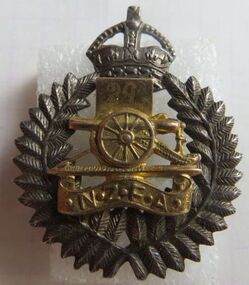 - Opposite: A Gold and Silver Sweethearts badge to the 29th New Zealand Field Artillery Reinforcement Draft. Marked "Stg. Silver." to back of frame, and "9ct" to back of "N.Z.F.A." banner. A brooch fitting also to back. Note the plaque to top, which has been engraved with the draft number "29". 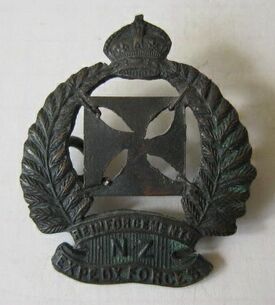 - Opposite: A rather scarce collar badge to a New Zealand (Christian) Army Chaplain associated with the WW1 Reinforcement drafts. I have not yet come across any information on this badge, other than seeing a couple over the years. It is probably made for the badge collectors market at the time. Certainly the New Zealand Army had a Chaplains Department, and they would have been a presents at the Reinforcement training camps during WW1, just as Chaplains served overseas with the NZEF in France, the UK and Middle East.