The New Zealand Rifle Brigade was formed in early 1915, and was initially called the Trentham Regiment, as this was where it was based and formed
It was granted the title "Earl of Liverpool's Own" on the 1st of May in honor of the then Governor of New Zealand, Arthur William de Brito Savile Foljambe, the 2nd Earl of Liverpool (1912–20).
Initially at its formation, there were just two Battalions of the NZRB, the 1st and 2nd. But in August 1915, the Regiment was expanded to include a 3rd and 4th Battalion. They would fight as individual units in the field, and also have individual Reinforcement drafts associated with each Battalion. At the end of August 1915, the crest of Liverpool was adopted as their Badge, it was also here that they changed the Regimental title to "The Trentham Rifle Brigade" (Earl of Liverpool's Own).
On the 18th of September 1915, advanced parties from the 1st and 2nd Battalions were sent overseas to Egypt, while the Officers and men of the 3rd and 4th Battalions started to arrive at camp in New Zealand to begin training.
On the 1st of October 1915, the Regiment was designated the "The New Zealand Rifle Brigade—Earl of Liverpool's Own." 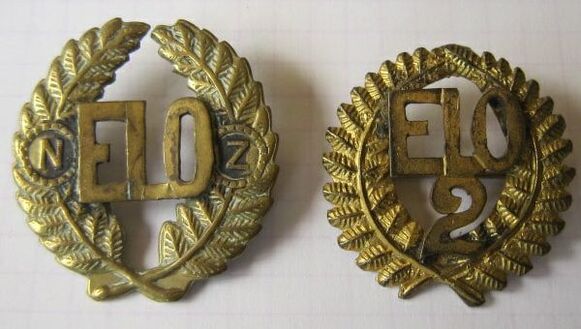 - Opposite: Are two early type ELO or Earl of Liverpool cap badges, worn by the initial drafts.
Both are gilt brass and 2 piece construction. There is also a ELO1 (1st Reinforcements to the NZRB) which I am missing in the sequence.  Both of mine are broach fitted to back. 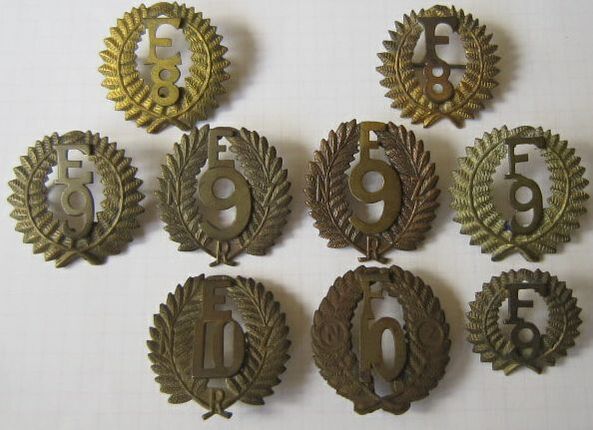 As well as the above, from the 8th Reinforcement onwards, the NZRB Reio's wore:
- Top Row, Left and Right: From the 8th Reinforcement, E was used by the 1st Battalion, and F by the 2nd Battalion (remembering that the 3rd and 4th Battalions of the NZRB formed much later in 1915 and therefore their Reinforcement Drafts were of later, higher numbered badges)
- Mid Row: Badges to the 9th E and F, all two piece and note on two types of different frame. The 9th F at the end also has a matching collar below, just slightly smaller.
- Bottom Row: Badges to the 10th E and F. 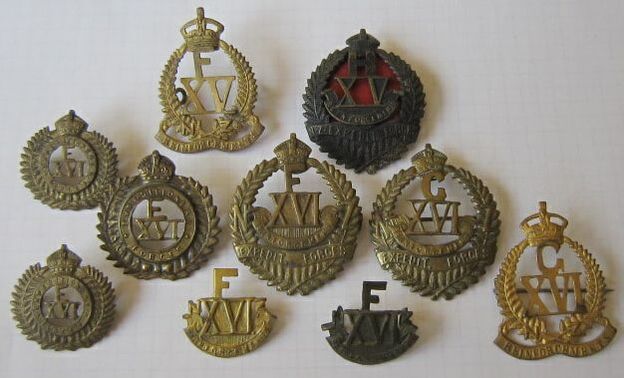 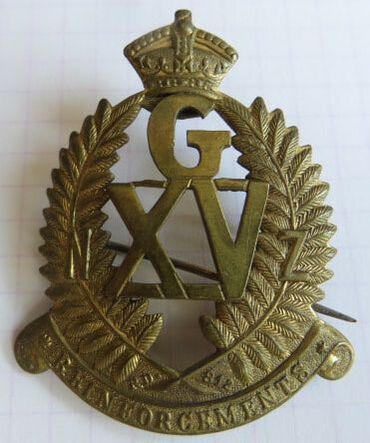 - Opposite: A 15th G (3rd Battalion) Cap badge to the NZRB. Note the badge is brooched, with lugs removed and a hinge, hook and pin fixed to back. Note the "RD" number, or Registered Design number, a early form of copyright which existed in New Zealand.

17th and beyond NZRB Drafts

These are all single piece, die stamped badges, with 2 hex type lugs to back.

From the 18th Reinforcements many of the New Zealand Rifle Brigade start to wear some of the Infantry generic types, and also their own generic type as discussed below. 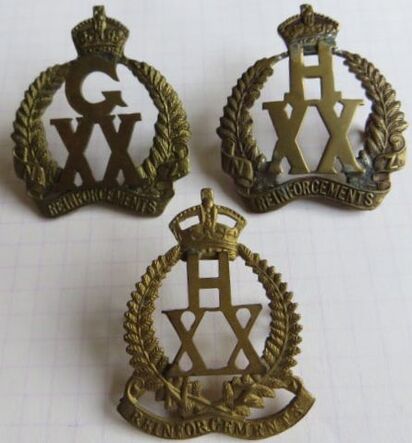 As mentioned above, the NZRB drafts were reduced to three between the 20th and 28th Reinforcements, so only the letters "G", "H" and "J" were used. 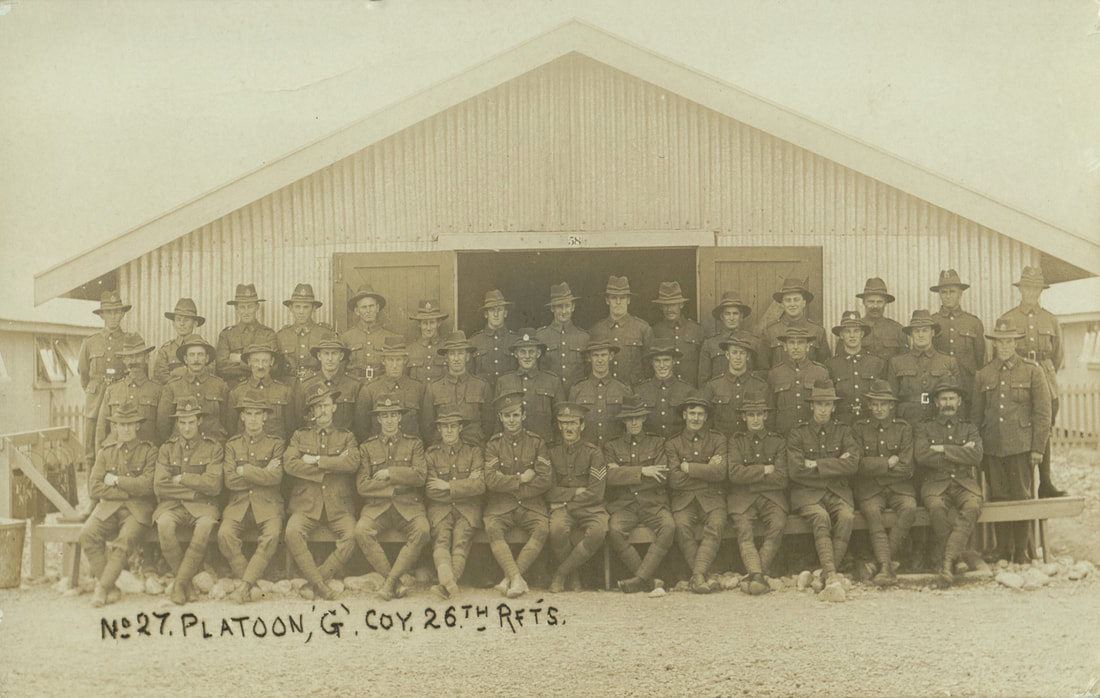 - Above: A WW1 image of No. 27 Platoon, G Coy, (Reinforcements for the NZRB), 26th Reinforcements in training camp in NZ. Most are wearing a generic NZRB Reio Cap Badge (see below) on a slouch hat, with NZRB Collar badges. One or two are though wearing the Infantry 26th Reio Cap Badge and "Canoe" Collars.
Note the NCO's wear a peaked cloth Cap instead of the Slouch hat.

As well as the above badges, numbered and lettered for each draft, the NZRB wore their own generic cap badge and collar, and it was down to taste or preference as to which one was worn. Opposite is a selection:
- Top Row Left: Two piece NZRB on a frame worn from the 12th/13th Reinforcements onwards.
- Top Row Right: Two piece standard Cap badge, commonly encountered. Frame type is found around the 10th Reinforcements onwards. Note to base of the NZRB center is the motto "SOYES FERME" (Stand Fast). Depending on jeweler and soldiers preference, the motto was either left on, or cut off when mounted on the badge frame.
- Bottom Row Left: Darkened version, retaining all of its black finish. Note, NO motto to base of badge.
- Bottom Row Right: Same badge, but in a gilt finish
- Middle Row: Two examples of the rather scarce collars. They don't often come up/appear, so may not have been popular at the time or widely worn. 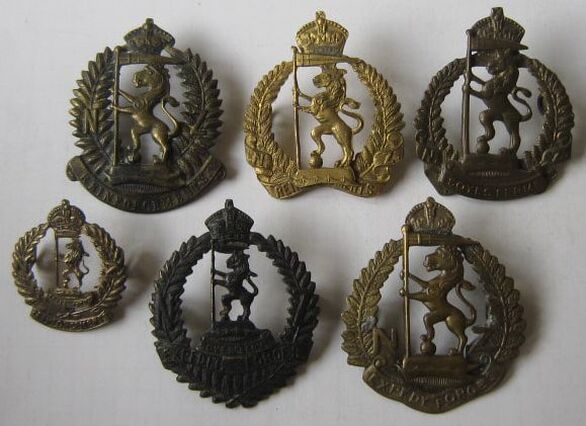 - Top Row Left: A slight variation on the above frame type, with the fern wreath tips finishing mid-crown at top of frame.
- Top Row Middle: Worn from around the 16th/17th Reinforcement drafts, the center has a NZRB badge with no motto and is in gilt brass finish.
- Top Row Right: Same as the above frame, but with the Regiments motto to base of badge.
- Bottom Row Left: Scarce collar type, not often seen.
- Bottom Row Middle: Another frame type, but note the mid size NZRB cap badge to center.
- Bottom Row Right: Scarce frame type with NZRB center in gilt brass.