The 12 New Zealand Mounted Rifle Regiment left with the main body of men in October 1914.
They too, would need specialised reinforcements, which would need to be trained in and around New Zealand.
Like their Infantry, and later, Rife Brigade counterparts, their Reinforcement drafts wore a privately purchased cap badge, which varied and depended upon personal taste and what was available.
Like the Infantry, the 1st Reinforcements left with the Main Body of men, while the 2nd followed suit, soon after. Upon arrival in training camp in early 1915, the 3rd, 4th and 5th Mounted Rifle Reinforcements adopted a Squadron system with the following letters:
- A Squadron (Auckland)
- B Squadron (Wellington)
- C Squadron (Canterbury)
- D Squadron (Otago)
This followed the Infantry's Area system which divided NZ up into four Area's.
It also meant that the Mounted Rifle Reinforcements wore the same two piece lettered/numbered badges as their Infantry counterparts. Same style and frame types. 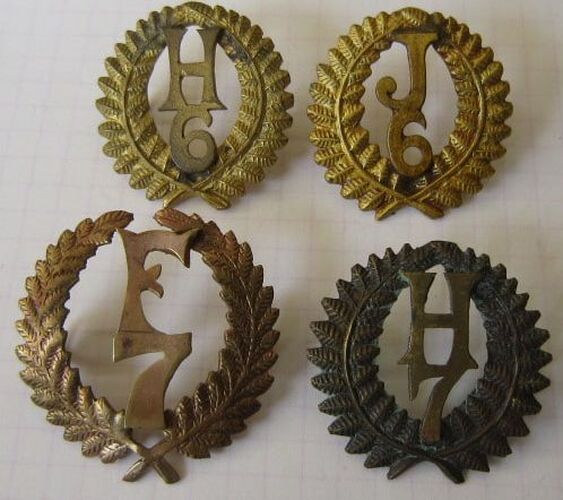 The 6th and 7th Reinforcements were merged to train together (and thus just became the 6th Mounted Reinforcements), to increase the rate of trained men leaving NZ at the time. Therefore E, F, G, H and J were used as well as A, B, C, and D.

A new 7th Reinforcements was then called into camp and they were lettered A, B, C, D, E, F, G and H.

The 8th to 10th Reinforcements used A, B, C and D only and their badges are the same as what is covered in the Infantry Reinforcement badge section on the website. 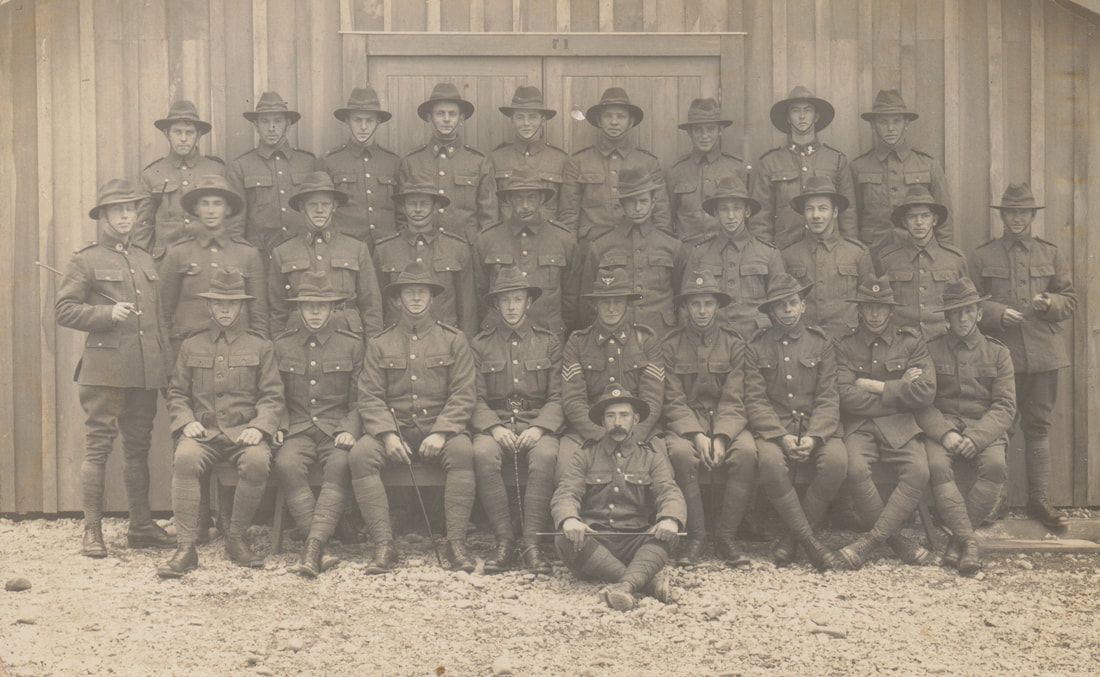 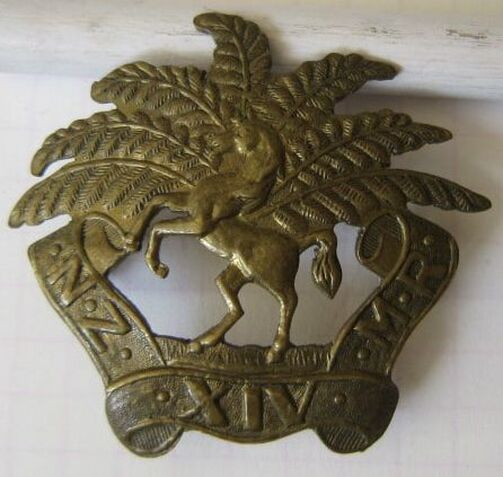 The 11th, 12th, 13th and 14th Reinforcements were still in New Zealand when the Allies withdrew from the Gallipoli Peninsular. Up until that time, all Mounted Rifles had fought as dismounted Infantry.
It was decided in April 1916, not to have all 12 NZ Mounted Rifles Regiments fight in the Middle East.
The Otago Mounted Rifles Regiment (which consisted of the three regiments - 5th (Otago Hussars) Mounted Rifles, - 7th (Southland) Mounted Rifles, - 12th (Otago) Mounted Rifles) would instead continue to fight as dismounted Infantry in Europe.
Surplus men were either absorbed into units destined for France, which were greatly expanded at the time, .i.e. NZ Field Artillery, Pioneer Corps NZ Army Service Corps etc.
Or men joined newly created units, such as the Pioneer Battalion or NZ Cyclist Battalion.
Some also chose not to join, and instead stayed back until further MR Reinforcements were required.

- Opposite: A gilt brass Cap badge to the 14th Mounted Rifle Reinforcements.

15th to the 18th Mounted Reinforcements 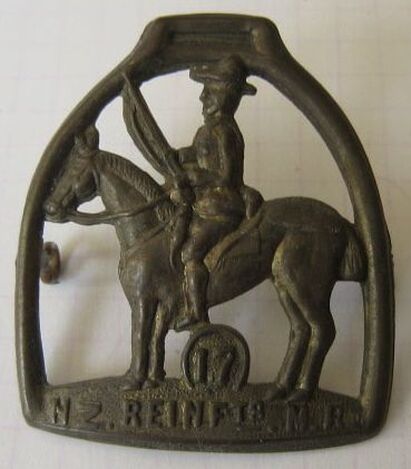 - Opposite: A gilt brass Cap badge to the 17th Mounted Rifle Reinforcements. This has traces of gilt to detail, on a now darkened frame.
It unusually features a Mounted Rifles Trooper on his horse within a Stirrup shaped frame. To base are the words "17 NZ. Reinfts. M.R.".

Two copper looped lugs are to back, but I would imagine these are not original, and are replacements.

19th to the 22nd Mounted Reinforcements 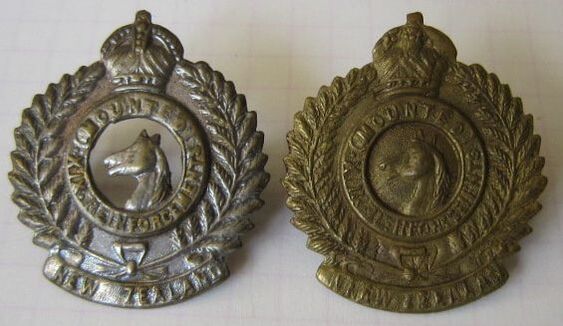 Like the above mentioned MR Reinforcement drafts, the  19th to the 22nd MR drafts wore either Infantry style or generic MR style badges.

It appears that some of the 19th did have their own Cap and Collars badges.

- Opposite: A pair of Collars to the 19th Mounted Reinforcements.
- Left: A single piece Collar in brass with a silver wash. To back are two lugs. Note the center is void.

- Opposite: Probably my most favorite style of Reinforcement badge.
The 23rd had their own unique designed in Cap and Collar Badge. All three badges are single piece, with two hex type brass lugs to back. The Cap has traces of gilt still to finish, while the collars are darkened either by design or with age.

- Opposite: The 24th adopted the same badge, but instead of re-striking a new badge with "24" to bottom center, the Jeweler just made a small round plaque, and sweated this over the "23". This increment of draft number on a base frame with a small plaque, became the basis for Mounted Rifle Reinforcement badges going forward.
Like the above badges, the 24th are in gilt brass, with hex type lugs to back. The left collar here, is actually a Stirling Silver sweethearts badge, with brooch fitting to back. It too, has the separately applied disc to front. 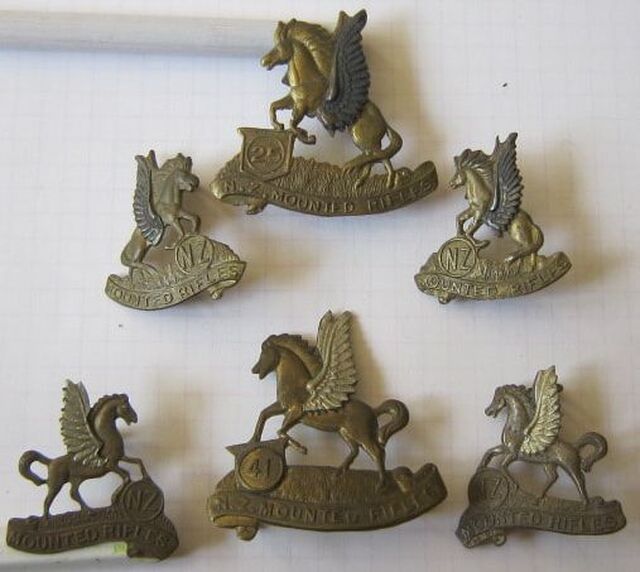 Opposite are the two basic numbered frame types used from the 25th to 47th Reinforcement drafts.

- Opposite Top: Frame type used by the 25th to 47th MR Reinforcement drafts. Referred to as the "Low Tail type" as the horses tail, is down on due to its stance. There are also matching opposing collars. All have a white metal wing, sweated onto the body of the horse.
They usually have hex type lugs to back.

- Opposite Bottom: This is the other frame type, used by the 31st to 47th MR Reinforcement drafts. This is the scarcer "High Tail type", again based on how the horse stands and the tail sits. The example here has a small round "41" brass disk sweated over the top of a base 31st MR Reio frame. Like their other counterparts, they too have matching opposing collars.
Usually found with copper wire lugs to back. 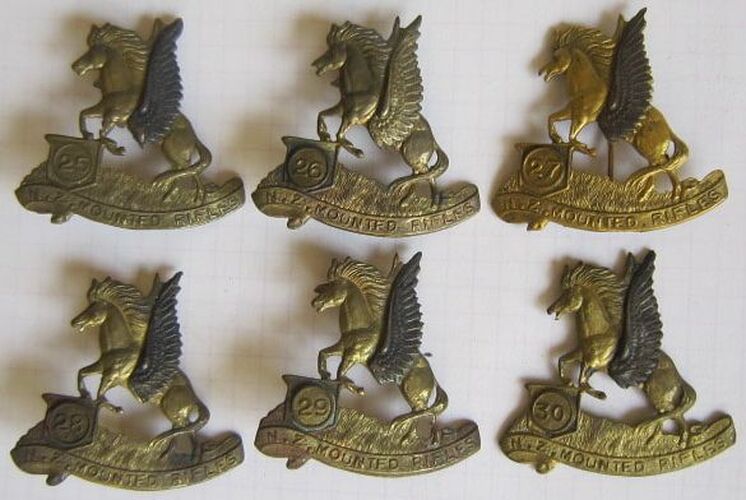 - Opposite: The picture shows the Cap badges to the 25th to 30th MR Reinforcement drafts.

Note the 25th MR Reio frame, which has no numbered disks sweated over the top. This is the first, base frame, with subsequent drafts having a numbered disc covering the "25".

My 27th has been converted into a sweethearts badge, with the addition of a brooch fitting to back and extra gilt applied. 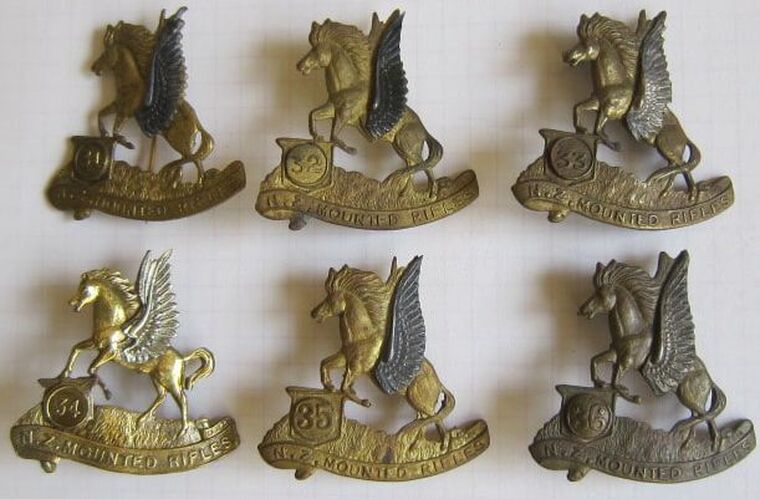 - Opposite: Continuation of the Reinforcement draft sequence, with the Cap badges to the 31st to 36th MR Reinforcements. 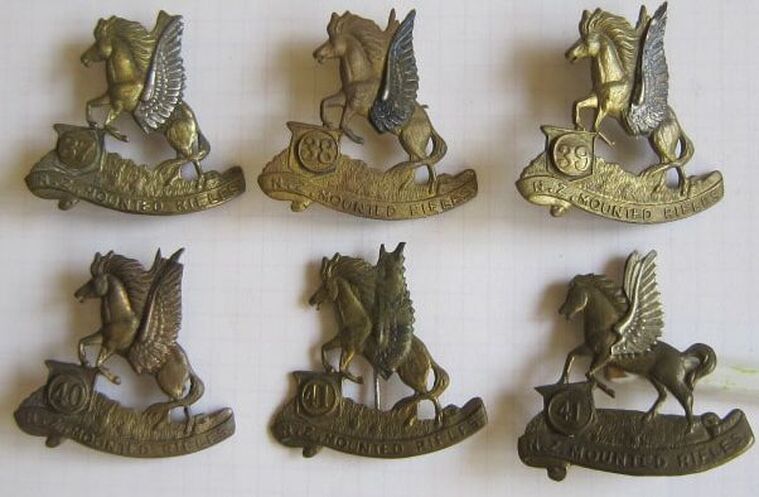 - Opposite: Cap badges to the 37th to 41st MR Reinforcements.

The two 41st Cap badges, show both types found, but with the "Low Tail type" suffering from loss of white metal wing to front.
It also has a brooch fitting to back. 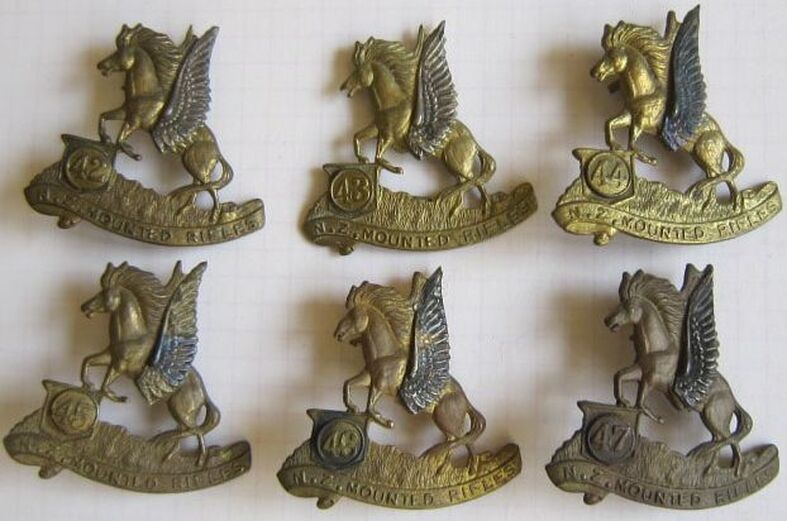 - Opposite: Cap badges to the 42nd to 47th MR Reinforcements.

Apparently badges to the 48th to 50th were made, but I have not yet come across examples. 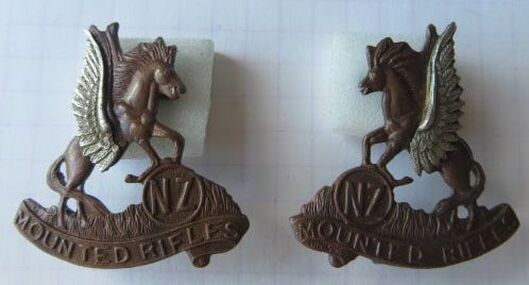 - Opposite: A rare set of matching Collar badges in the "Low Tail type" in Copper and White Metal.
All badges were private purchase, so it was down to what the Trooper could afford and style they wanted.

These Copper based badges seem to have been not as popular or maybe not widely available, as their gilt brass counterparts, so are extremely scarce.

Both have two hex type lugs to back in a North/South configuration. 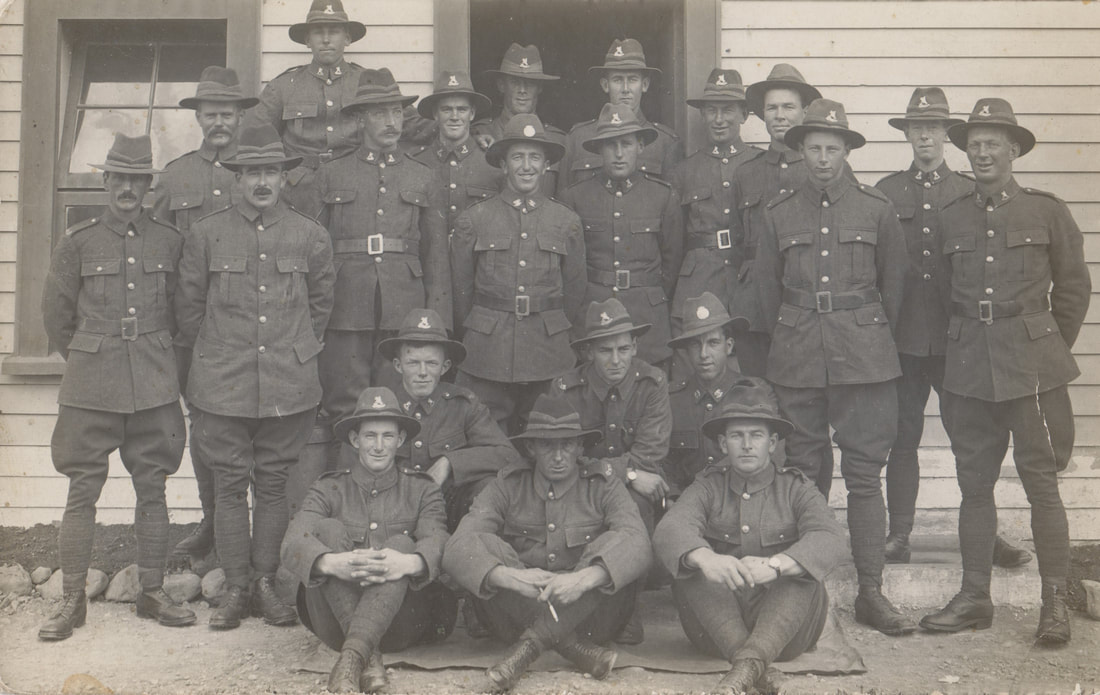 - Above: Another image of 78601 Trooper Arnold Hobson Maddren. He is back row, 3rd from the left (short). Arnold sailed on the 10th of October 1918 with the 43rd's. Sadly he must have returned immediately, as he died of Peritonitis at Temuka's Te Rata Private Hospital on the 12th of April 1919. He was from Winchester, South Canterbury.
Note the "Low Tail type" of Cap and Collar badges being worn.
The Trooper to the center and also second row, right are wearing Cap and Collars to the 1st (Canterbury) Mounted Rifles Regiment. 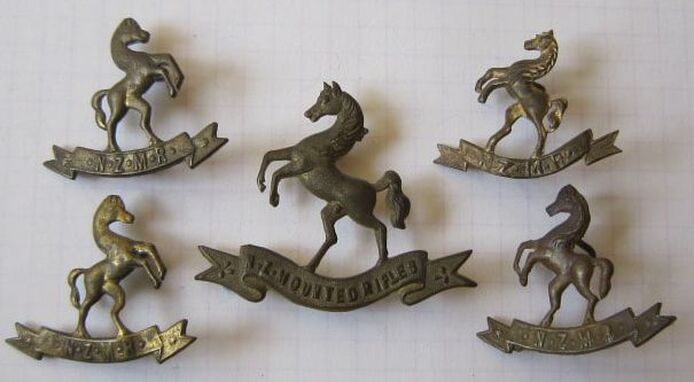 From about the 10th MR Reinforcements onwards, a generic cap and/or collar was also worn with either specific Mounted Reio Badges or the frame types covered in the Infantry Section on the website. Opposite is a selection of what is described as the 1st type Generic MR Reio badge, and is based on the 9th (Wellington East Coast) Mounted Rifles Cap badge, but instead of a motto at the base, just has "N.Z.M.R".
There is some slight variations in opposing collar detail.
All have copper wire lugs or hex type brass to back. 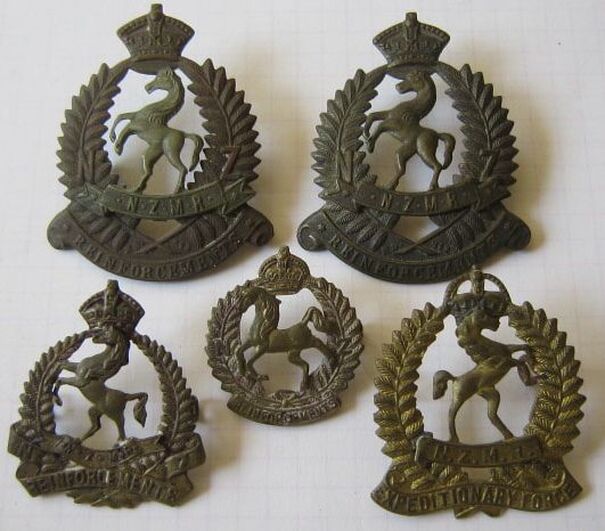 A selection of Cap and a single collar badge.
- Top Left: A bi-metal cap badge, with white metal horse to center.

- Bottom Left: A frame type of around the 16th/17th Reinforcements, with the addition of a rampant horse to center.

- Bottom Right: A frame type used by the 34th Reinforcements and onwards, with rampant horse added to center.
30306594-2